How’s your year going so far? I do realize I’m about a month late but keep reading and you’ll find out why.

Before I move fully into 2017, I must reflect on 2016 for a minute because it was a year filled with struggles, some accomplishments and bitter-sweet moments.

I’ll try to keep this in order.

I stepped out of my comfort zone and took a trip to Vegas for a chiropractic seminar. You can see my posts on that here, here and here. This was the first time I’ve ever been away my husband and kids. It was hard but a good learning experience for all of us.

I’m not sure where to begin because this is hard for me to talk about and for years I was in denial but…..I finally came to the realization that I have been suffering from depression. Two years and twenty pounds later, my eyes finally opened and I realized what was happening.

I never realized how much being in denial could hold you back until this year. I have so much more to say about this but I’m saving it for a future blog post. Trust me, there is going to be a lot to read.

This same month I joined an online fitness challenge and it helped get me out of my funk and realize I am still capable of acheiving my goals.

I continued to work on improving my diet and fitness.

This was a very bittersweet month as my youngest child completed his last year in elementary. I’m not going to lie, I dreaded this day all year-long and what made it even harder is my son had the sweetest teacher who he adored. He has some learning struggles in school and she was the only one who really understood him. For moms who understand, getting a good teacher who’s on the same as you and your child is golden!

I knew the goodbye would be hard but I never imagined I would be bawling my eyes out in his teachers arms on the last day of school. I thought I would be strong but when it was time to say goodbye, everything from the last year flashed before my eyes and I was not ready for it to be over. I was not ready for my youngest child to start junior high. I might have taken it harder than him. 😦

Good news is we still keep in touch with this teacher and I am glad because all he talked about all summer is how much he missed her.

Needless to say, I wanted to savor every moment of summer. And so I did, with plenty of trips to the hiking trails and beach with my family and friends.

I attended IDEA world fitness convention and Blogfest. I enjoyed myself so much! You can see the highlights here

Seeing this photo again makes me happy because this week I felt better and happier than I have felt in a long time. I was beginning to feel like me again. 🙂

Summer was coming to an end and it was time for my kids to start school. I was really nervous about my son starting Jr High. Possibly to the point of making me sick. One day before he started school I woke up to a spinning room. I tried to pick up my head to figure out what was happening and I couldn’t. I held onto my bed until the spinning stopped. I’m like, what is happening? It felt like a was on a roller coaster that wouldn’t quit. I quickly became very nauseous and had to vomit. Sorry if this is getting gross. I went back to bed and slept most of the morning. I did not make it to work that day.

I went to the Dr. a couple days later and confirmed I had vertigo. For the next two months, I dealt with dizziness every time I did anything, especially driving. I didn’t want to go anywhere because I was afraid I was going to start spinning and eventually pass out. I didn’t help that we were experiencing triple digits temperatures and my car had no A/C. I felt ill for months which is part of the reason I havent kept up with my blog or social media. I did see an ear, nose and throat specialist who explained how common my condition was. Really? This is common?

Eventually, my symptoms started to improve. It has been 5 months since this happened and each month continues to get better. I still feel it here and there but not nearly as bad.

During this time, I was discouraged. Here I was getting back on track with my diet, fitness and mental health and now this? I kept asking “why?” I was so afraid that I was going to lose my momentum and spiral back into gaining weight and being depressed but… I didn’t. I kept up my daily routine and persevered. Thank God for giving me the strength to keep moving forward!

August, September and October were stressful. Not only was I stressed about my son being in Jr High and seeing him struggle in the beginning while still dealing with vertigo, I was in the middle of re-financing our home.

I’m not sure if you can relate but why is buying a home or re-financing one of the most stressful things? It seems like nothing ever goes as planned and every day I was faxing or emailing documents to my lender or having to make a call phone calls. Ok, rant over.

After two months of headaches, our re-finance was finally complete and it worked out in our favor. As we hoped, we were able to pay off debt and finally get a fixed interest rate. It was an adjustable before. I was so thankful!!!

I finally got a new (er) car!!!!!!!!!!!! Yes that many exclamation marks in necessary because its been a long time coming. A long time! It’s still a used car but its new and exciting to me, especially because the A/C works. My old car was passed on to my daughter which is awesome because she gets to drive herself around now. If you’re a mom of a teen, you feel me right?

TIME FOR SOME FUN!

A week later, we went to Vegas for a friend’s wedding. This was the first time, my husband and I have been in 13 years.

We had so much fun dressing up and going out with our friends. We don’t get out much!

I normally do not post photos of myself like this but I was feeling too great not to. I had been working out hard for months and was down 12 pounds! ( I think that mirror needed to be cleaned)

We had a great time! It was a much-needed adults trip.

I spent this last month being thankful for everything this year brought. No one really wants to go through struggles but I truly believe we are more appreciative of the good times that follow.

This month also marked 5 years since we adopted our sweet Rusty. This dog brings me joy every single day.

So those are the highs and lows of 2016 for me. It literally took me a month to write this. I struggled with letting my guard down and admitting I had struggles. Who was I kidding? No one is perfect.

If I could describe 2016 in one word, it would be ACCEPTENCE. I finally learned to accept what is and be okay with it.

Here’s to more accepting and moving forward in 2017!

What did you take away from last year and what are your plans for 2017? I’ll tell you mine in the next post.

Well, that took a while! I felt like I just told my life story.

Thank you so much for reading. 🙂 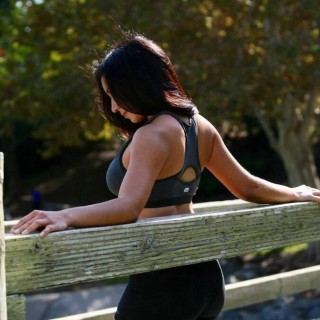